For a series as obscure as Fighting Foodons there actually does exist some merchandise but they are far and few between and are very hard to come by as most of what little merchandise there is, is Japan exclusive and probably not easy to come by there either. Here is a complete (as far as we know) list of merchandise that exists.

The entire franchise started out as a two volume manga series titled Legendary Martial Arts Bistro Recipe. Written and illustrated by Naoto Tsushima that was released in 1998 by Comic BomBom, who also produced Manga based on Megaman, GeGeGe no Kitaro, SD Gundam, Teenage Mutant Ninja Turtles and Spider-Man J.

Released for the GameBoy Color in 2002, there are two versions of the game with minor differences between the two, a similar practice that the series’ inspiration Pokémon uses to this day. There is also a version of the game for the Wonder Swan console as well which acts as a “definitive” version of the games. ROMs of the games are actually available for download online.

All twenty-six episodes of the 4Kids English dub is available on DVD and while it is the only piece of merchandise available outside of Japan and is available for online purchase, it goes for a lot of money due to it’s rarity. If you actually own this DVD, you are a TRUE Foodon Fan.

Fun Fact: The DVD cover features official, colorized artwork of Foodons that were exclusive to the video games.

There was a line of plushie-style keychains. It is confirmed there are keychains of Fried Ricer, Sir Dumpling, Shrimp Stompura, Omelette and Fry Slinger. It’s unknown if this is a complete set or if there are more.

There was a set of wind-up toys based on multiple Foodons. There is only photographic evidence of the Sir Dumpling, Gazmacho, Burnt Meatball wind-ups but the existence of Fried Ricer, Omelet and Wing Ding wind-ups have been confirmed by now defunct E-bay listings.

There exists a TCG of Fighting Foodon/Bistro Recipe but it’s unknown what the cards themselves look like, the only evidence of this trading card series is a photograph of a starter pack.

Sets of Fighting Foodon/Bistro Recipe themed lunch boxes or “Bento Boxes” exist. The only photographic evidence of these bento boxes is of the Kayla variation. Good for her. 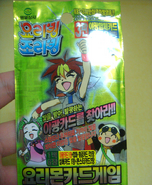