Coco is a cunning ninja girl who wears a wok on her head; she sometimes uses the wok and ninja stars as projectiles against the opposing enemies. Chase first met her on Banana Island and she is a student of Chef John. She later became friends with him, and both of them fall very much in love. Her Foodons are Doughnut-So, Ham Scam-Witch, and Tater Tons. Chase and Coco's relationship is quite popular among some fans.

Descrption: She wears a wok on her head, she wears a black mask that covers her lower face and has purple hair in two large pigtails. She also wears a pink leotard.

In the manga she had a katana and fought with it.

In the manga she, Chase and some other characters were much older. In the show Coco and Chase are around 11 years old whereas in the manga they were 3 to 4 years older.

In some of the manga covers she had brown hair instead of purple. 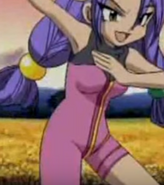 Coco with mask and without wok
Community content is available under CC-BY-SA unless otherwise noted.
Advertisement