Clawdia/Dia (JPN: 味亜味亜) serves as one of the secondary villains of the show, she was once a young human girl and a rocket scientist who was turned into a catgirl by King Gorge. She will try to stop Chase, Coco, and the others on their quest to stop King Gorge, however, she always manages to fail. To which, Chef Grill is less than impressed. She's somewhat similar to Momite Bomber, from Bomberman B-Daman Bakugaiden. As the subordinate, she's often clumsy, a little frazzled at times, and tends to be either picked on, or lowered in rank by chef Grill. Like Momite, she often often is the subject of comical failures, by which everyone on the dark side shakes their heads, or grows even angrier. In Bomberman Bakugaiden, Tiger even loses his patience, and demands to Koutei, that Momite be fired. Unlike Momite, who needs his job, she was only brainwashed, and turned into a cat by King Gorge. She also the one main, lesser villains that try and either spy on the protagonists, or through a series of mishaps, tries to mess with them. When she is turned back into her human self, she is immediately zapped by King Gorge.

Clawdia is an anthromorphic cat with pink fur and wears a red bikini with a orange ribbon tied around it. She has green eyes with pale yellow scalera.

When she was restores to Dia, she wears an apron.

Voiced by Veronica Taylor, who is famous for voicing Ash Ketchum on fellow 4Kids show, Pokémon. 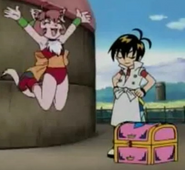 Clawdia back to her old self Dia
Community content is available under CC-BY-SA unless otherwise noted.
Advertisement